I was born in Plattsburgh, New York, a small city up in the Northeast corner of the state by Vermont. My Mom was a teacher, and my Dad had a garage. My brother John was born 3 years later. All of our grandparents were dairy farmers. It was a peaceful, quiet place. I had a horse when I was 10, and life in the country was very good. I was a nature lover from the get-go. As great as it was, I always had Gypsy Feet, which meant I yearned to travel and see the world. If you've ever heard a lonely train whistle blow or watched a freighter on the Great lakes or watched a jet stream scrawling across the sky and wished you could go along, then you know what I mean by "Gypsy Feet".

I met Bill Jantz on a blind date in October of 1963. I was 17, a Senior in High School and he was 21, an airman from Detroit, Michigan who was stationed at Plattsburgh Air Force Base. We went to a Battle of the Bands dance at St. John’s High School in Plattsburgh with my girlfriend Laurie and her date, Roy Mainger, another airman from Cleveland, Ohio.  Bill was a really handsome young man with a beautiful smile and a flattop haircut, and I was gone as soon as I saw him. We met that night, and as the expression goes, “The rest is history”.

We dated for 2 years, and then Bill got out of the Air Force and went home to Detroit. That was in April. In September, he came back to Plattsburgh, and we were married.  I moved to Detroit right after our honeymoon. I had three years to go on my Bachelors Degree after we were married. I entered Wayne State University in Detroit right away, and I got my BFA from there three years later in 1968.

Now the Gypsy Feet thing really kicked in. We were very young, very much in love and very eager to explore the world together. We joined the Peace Corps when I graduated and spent a month in the California Mohave Desert training to go to India. It was 120 degrees in the shade, and needless to say we found it stifling. We dropped out and went back to Detroit. Bill was working as an automotive draftsman. The next 2 years were miserable for both of us. We had tasted the world of travel, but we were right back where we started from. We wracked our brains trying to figure a way to travel.

Then lo and behold, in 1970 an ad appeared in the Detroit News for an automotive draftsman in Adelaide, South Australia. It was spelled draughtsman, but we understood what that meant. Bill applied, the firm International Automotive Design, IAD hired him sight unseen, and we were off on our oddessey. So Australia was our first foreign romance, and to this day, several countries later it remains our all-time favorite. Later on we would follow a merry band of Aussie, and English draftsman to car companies in Germany, Sweden, England, Belgium and The Netherlands. Then later still in 1986 we would return to Australia with our two children. But in 1070 we were newbies at this ex-patriot game, and we enjoyed it immensely.

We're back in the Detroit area now, and we are loving it here in the Renaissance City. Now I have the time to remember all the great times we've had. I don't want to live overseas any more, but I wouldn't refuse a trip now and then. Costa Rica is at the top of the list because I just wrote a children's book that is set there. 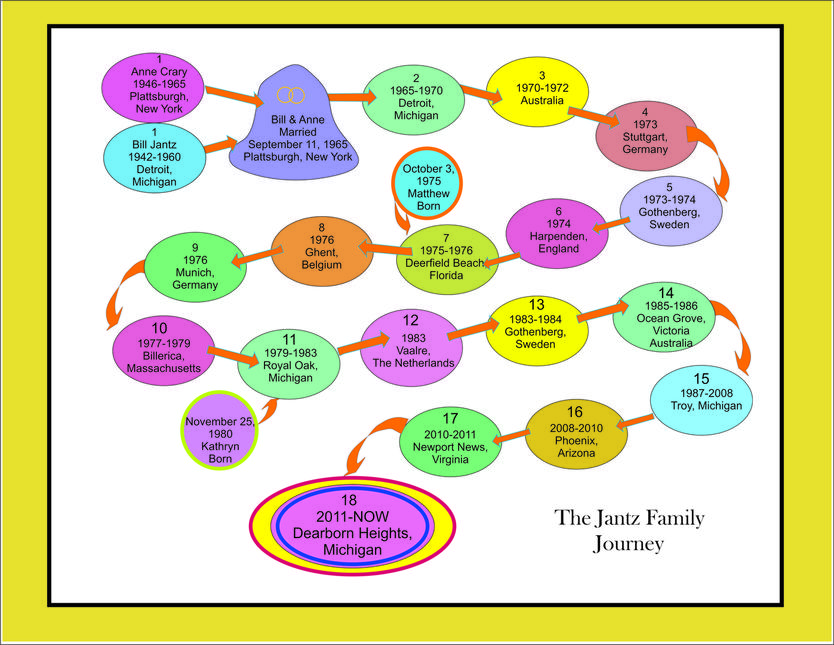 After that, we traveled around the world living in 7 countries and 7 states, all financed by Automotive Design. Later I got into the game doing computer aided design (CAD) for architectural companies. That degree in Sculpture paid off, because I draw in 3D now on the computer. Along the way, we managed to have 2 wonderful kids, and then we kept going, dragging them along.

Have a look at the graphic below and click on a number to go to that chapter in our  saga. I hope you enjoy our story. 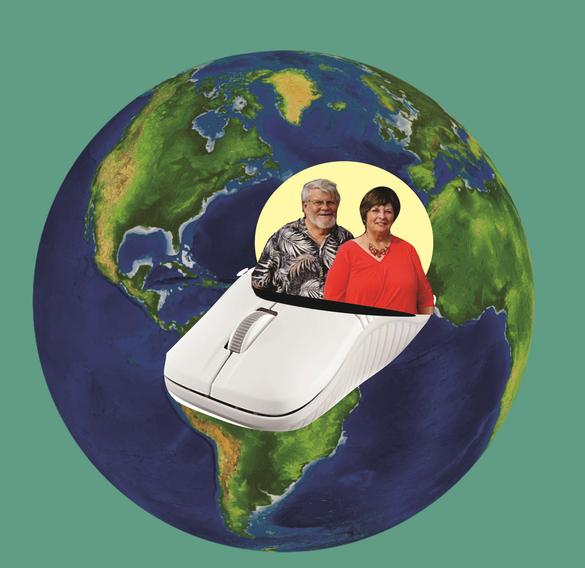 I met Bill Jantz while I was still in high school. He was an airman at Plattsburgh Air Force Base up in Northern New York State. Two years later Bill asked me to marry him, and I said yes. Bill's whole family came to Plattsburgh in September of 1965, and we got married.

I moved to Detroit then and started school at Wayne State University in Detroit the same week. I got a B.F.A. in Sculpture from Wayne, and Bill and I began trying to find a way to travel and see the world.

Little did we know that Bill's profession as an automotive draftsman would turn out to be our ticket to ride, for real. One day an ad appeared in the Detroit News for a draftsman for a company in Adelaide, South Australia, and Bill sent off his resume. The company hired him, and we went.

COME ALONG WITH US ON OUR RIDE!

So, this is our story, I hope you enjoy it!

Click on the numbered buttons at each location to visit that city.

RIDING ON THE BACK OF THE MOUSE:

(cad) HELPED SHOW US THE WORLD